“Isatu Menjor is an empowered woman thanks to the support by European Union, Welthungerhilfe and SEND” 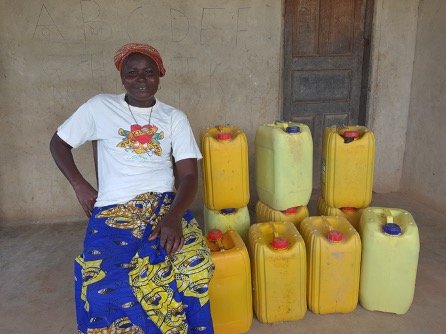 Isata Menjor is a widow and lives in Manehun, Dodo chiefdom, Kenema District with her two children. Sad enough that she has to take care of her children, her late husband’s family threw them out of the house because according to them, if a man dies, his relatives or siblings own his properties not his wife. Left to fend for herself and her children, Isatu started working for meager some of money in people’s farm to provide food and other basic essentials and save little or nothing for her children’s education.

"“Life became unbearable for me when my husband died, i was neglected by his relatives who used to treat me kindly when he was alive."

But I had one thing in mind to be very determined and not allow this circumstance take me to early grave and leave my children to suffer. Isatu stated confidently. As years passed by, she used her little savings to buy food condiments such as pepper, onions, salt, maggi etc from the neighbouring village. She would trek about four miles to go to the village and after purchasing her goods, transport her goods with a bike. In 2020, she was introduced to the WASH self supply. A project designed to support beneficiaries especially women have access to finance to start or expand their businesses and also enable them access WaSH facilities in their communities. At first she was reluctant but then she persuaded to join a meeting that was held by project staff. Little did she know, her life was about to change! She became a member of the “Mugbormuma VSLA” meaning “Let us help ourselves” in a local dialect Mende. Considering her active role in the group, she was made chairlady. With four million, five hundred thousand leones givien to them as part of the revolving loan, she took a loan of five hundred thousand which she invested into buying and selling of palm oil.

“I decided to change my line of business because at the time I took the loan, it was palm oil season and the palm kernels were been harvested. I bought seven gallons at first and made a profit of about one million leones."

Through their group savings as well, she has been able to contribute to stop open defecation by constructing a water and toilet facility.Once abandoned by her in laws, Isatu now boasts of being self-reliant and is able to support herself and family and also some in–laws who abandoned her when she needed them most.

““This project is life changing and I am grateful to European Union, WHH and SEND for such initiatives.”

With her profits and loans, she is now able to buy up to 60 gallons of palm oil. It is Isatu’s hope that in the coming years, she can construct a house for herself to reduce the burden of having to pay house rent.