“Telu Musa is an agent of change in Lawana thanks to the support by European Union, Welthungerhilfe and SEND” 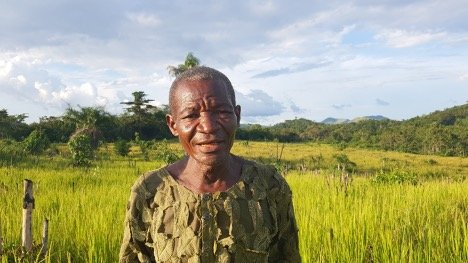 Few years ago, Telu Musa moved to Lawana, Dodo chiefdom, about six miles Kenema city when his wife died during childbirth. With having to take care of the children alone, Telu’s life was shattered. He mourned his wife greatly as she was very supportive and helpful in everything he does. He was counseled by his mother who gave him the zeal to start life afresh and be there for his children.

As a farmer he cultivated inland valley swamp rice on an approximated 4 acres of land. Telu began to regain strength to work hard and take care of his children and just when he thought everything was working out well; his house was flooded and lost all properties. That same year, during harvesting season, his rice did not yield much harvest.

“I was devastated and thought I had been bewitched, I just couldn’t handle the troubles. I thought of so many bad things but my mother kept talking me through it” he explained.

He took a loan of four hundred thousand to embark on his agricultural activities. With a profit of about 900,000 leones, Yusuf enrolled himself on a distance learning course to ensure he acquires further education to enable him be part of the payroll system.

When he almost felt like giving up, the project started its implementation in Lawana community.At first he was skeptical and thought that the project was a scam. But having explained all the project objectives by the staff, he decided to be part of the “Pyemutor” meaning “do and Let us see” VSLA Because of his leadership roles displayed he was appointed as chair for the group. He first took a loan of about 600,000 to cultivate his rice farm and also bought some farming tools. This time, the yields were high.

“I was very happy when I had such high yields. After harvest, I made the rice available to the community for sale and some of the profits used to support my daughter who was preparing for exams and also my mother in her petty tradingbusiness.” He smiled.

As a man in the community, several residents thought the group was purposely for women but that narrative changed when they saw changes in his life and other members(men). Telu now serves as a change agent and mentor to other groups formed under the project VSLA groups. This has motivated a lot of men and they now treat their wives respectfully and involve them in decision making processes in the home.

“I am not yet totally financially independent but so far, there have been significant changes in my life and children. I am so thankful to European Union, Welthungerhilfe, and SEND Sierra LeoneL. My plan is to construct a house with a store to keep my rice till it gets my customers.", he expressed with a smile